Do Not Underestimate Our Intelligence

Namibian president said “do not underestimate our wisdom.” after The “concern” of the Chinese government from Germany Politician.

Some Western countries and the media have spared no effort to hype the so-called “threat and influence” of China on Africa, which has made African leaders unable to listen and have begun to “fight back”. CNN reporter has just been resent by the president of Kenya, and the former speaker of the Bundestag in Germany was again defeated by the president of Namibia. 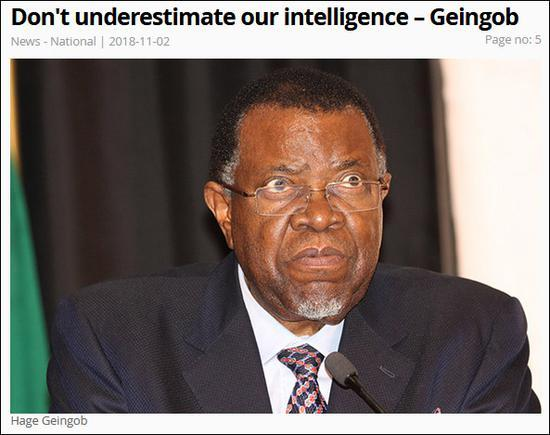 Norbert Lammert, former Speaker of the German Bundestag, recently traveled to Namibia to express two “concerns” about President Hage Geingob, according to the Africa media “Namibians” local time on Tuesday. The first, China’s growing influence on Namibia and the second point, the growing corruption in the country. Base on this, Geingob said in a statement at the presidential palace, “please do not underestimate our intelligence.”

Norbert Lammert served as Speaker of the German Bundestag from 2005 to 2017 and is currently chairman of the Konrad Adenauer Stiftung (KAS), a political foundation with a CDU background. He is here to celebrate the foundation of the establishment 30th anniversary in Namibia and Angola.

President Geingob told Lammert that other countries’ “worries” about China’s influence in Namibia are “annoying”, which assumes that Africans are still children and are not mature enough to deal with the world’s major powers.

The president added that Europeans may think they can deal with the Chinese because they are mature and Africans are poor and they will only be bribed. “If the Chinese come to violate our laws, we will deal with them according to law. So just like welcoming the Germans and others, we also welcome the Chinese to come to Namibia. Please do not underestimate our wisdom.” Geingob said.