The largest art museum and a historic monument in Paris, France, is also the largest in the world. So what is it? The Louvre Museum (French Musée du Louvre). Certainly, it is also the central landmark of the city. In France, there are so many famous historical relic and building, meanwhile the Louvre museum is one of the most famous ancient building not only in France, but it is also well known around the world. So let us know about Louvre museum detailedly, let us know the history at that time.

It is located on the right bank of Seine river, ranking top 1 of the world’s four museums, and other 3 of museums are separately as British Museum, New York Museum, Russian Museum. It covers an area of about 198 hectares and is divided into old and new parts. The pyramidal glass entrance in front of the palace covers an area of 24 hectares. It was designed by Chinese architect Mr. Ieoh Ming Pei. In August 10, 1793, The Le Louvre Museum Art Gallery was officially opened to the outside world and became a museum. 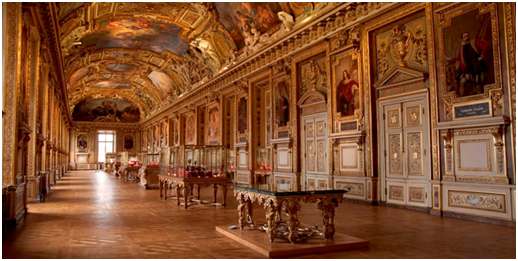 Le Louvre Museum has become a world-famous art palace, one of the greatest treasures of art, the palace of countless treasures as being the focus of world attention. The palace was built in 1204, at that time it was only the castle of Philip Augustus’s palace (Philip II of France). The palace is famous for its rich collection of classical paintings and sculptures, and is one of the most precious buildings in the French Renaissance. The Louvre is divided into six parts: Greek and Roman Art Museum, Egyptian Art Museum, Oriental Art Museum, Painting Museum, Carving Museum and Decorative Art Museum.

In 1204, during the Crusade (Cruciata in Latin), Philip II of France built a castle on the Seine river to defend Paris on the North bank, where he kept Royal records and treasures, as well as his dogs and prisoners of war. It was then called the Louvre. During Charles V, the Louvre was used as a palace, making it a completely different building. Over the next 350 years, as the Royal aristocracy became increasingly demanding for pleasure, they continued to build magnificent towers and fancy and delicate rooms. However, in the following 150 years, there was no king living in Le Louvre Museum.

In the middle of 16th Century, after François I ( François de Angouléme) succeeded to the throne, he demolished the palace. He ordered the architect Pierre Lesko to rebuild the palace on the basis of the original castle. During the reign of Henry IV, he spent 13 years building the Grand Gallery, the most spectacular part of the Louvre.

The more information about the Louvre Museum.