Chengdu is the capital of Sichuan Province, China. Let is know about Chengdu, this splendid and beautiful City.Click Here For More. 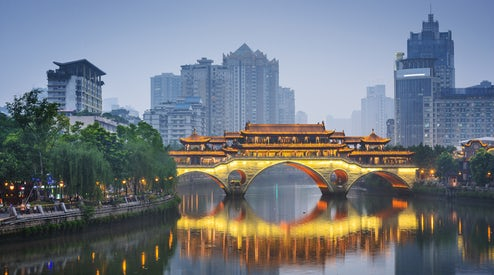 Chengdu is the capital of Sichuan Province. It is also called Rongcheng and Jincheng.Click Here For More. It is a sub-provincial city and a mega-city. It is located in the west of Sichuan Basin and the hinterland of Chengdu Plain. It has flat terrain, River network, abundant products and developed agriculture. It belongs to subtropical monsoon humid climate. Under the jurisdiction of 11 districts, 4 counties and 5 county-level cities, the total area is 14,335 square kilometers; the permanent population in 2017 is 16,045,000.

Chengdu is an important base of electronic information industry in the world, a national historical and cultural city, the birthplace of ancient Shu civilization, and one of the ten ancient capitals of China. Nurtured Jinsha Site, Dujiangyan, Wuhou Temple, Dufu Caotang and many other scenic spots and historic sites, it is the best tourist city in China. Chengdu has successively won the world’s best emerging business city, China’s inland investment environment benchmark city, the national small and micro enterprises double-venture demonstration base city, China’s top ten cities in comprehensive strength, China’s top ten start-up cities, and so on. In April 2016, the State Council made it clear that Chengdu should aim at building a national central city.Click Here For More.